It's Internet Week in NYC, and I'm there. Completely coincidentally, and without much chance to participate!

OK, the one thing I'll be doing is speaking again at MediaBistro Circus. Really looking forward to talking about new media business models. Couldn't be a more urgent topic for the media industry right now, could there?

I'm not so much looking forward to following the Cirque du Soleil!! Yup, MediaBistro has lined up an act from the Cirque to perform for attendees. And due to their performance schedule, they've got to be slotted in right before the closing panel.

Normally, it would be awesome to close out a conference. But somehow, I'm not thinking coming between the Cirque and the cosing reception is the plum spot...can you say hard act to follow and being a barrier between attendees and their cocktails! Good luck to us, that's all I have to say :)

The rest of the week BlogHer's sales team has my time almost completely booked. I'll be out and about presenting our 2009 Women and Social Media Study in some detail.

I'll also try to fit in meeting up with a few folks to catch up, both industry and friends from my former life living in NY.

Thinking catching a Broadway show might not be in my future this week, which is a real shame, considering the Tony Awards are a week from today.

Boy, how my trips to NYC have changed...from the theatre to the Internet. What a long,strange trip it's been!

Quick thought: How can there be six conferences about Twitter? And as always...where are the women?

I read Leena Rao's post on TechCrunch about Six small conferences about Twitter, first with some amazement, and then with a feeling of familiarity.

Amazement because: I too find it ironic to have so much content swirling around about an application built (and widely adopted) based on the concept of brevity

Familiarity because: Wouldn't you just know that every speaker Leena calls out in her post is a man? Surely, that can't be, I thought. And it wasn't when I actually went to each site and review their speaker pages and did the math. But the ratio wasn't great. Less than 30% women across all six conferences...and that was mostly on the backs of one or two of the events that had pretty good ratios.

And dare I say that the people actually creating interesting *content* in my twittersphere are women. Having robust debates. Sharing wry observations. Egging their followers on to action.

I follow all the same "big guns" as anyone else, and what I often get from them are a bunch of links. At best, signpost links to interesting stuff other people are doing or talking about. That's a time-honored social media segment...the signpost blogger, the signpost twitterer. Robert Scoble. Guy Kawasaki. but often, just self-promotional links. Certainly we post a lot of links in Twitter via our @BlogHer account. We also do a lot of direct customer support via that account.

I just hope that while all these conferences are talking about Twitter, the potential traffic driver and marketing tool, they also give it its due as a community-builder, as a relationship-enhancer, as a conversation-driver, as a social-change-agent, as a window-to-my-most-ephemeral-but-therefore-most-uniquely-me-thoughtsand as a lot of other hyphenates that aren't really about how many followers you have or how many referrers you get.

In my corner of the twittersphere, enriched by the heavy adoption of women bloggers (some stats on that cross-usage are in our 2009 Women and Social Media Study, in case you have not checked it out yet) Twitter is all of that. And I think it's noteworthy. Conversation-worthy. Perhaps even conference-session-worthy.

But I'm still amazed that it's six-conferences-worthy. Call me old-skool, we're sticking with a couple of sessions on Twitter and similar apps at BlogHer, not even an entire track!

Last year BlogHer was honored to win the Anita Borg Social Impact Award, and then I was honored to be invited to participate on the Nominating Committee for this year's Women of Vision Awards. (I know, that's a lot of being honored.) What does a nominating committee do? Well, they try to find excellent people to nominate or try to get colleagues to nominate excellent people they know. I worked with colleagues to nominate three different women, and I knocked it out of the park as a firs-timer on the committee, because on of my nominees, Mitchell Baker from Mozilla, won the Leadership Award.

The banquet event honoring the winners, including Mitchell, was inspiring...inspiring to be among so many great women geeks, and inspiring to hear some of them share their experiences and their expertise.

My two personal faves (and I admit to being biased re: the latter) were Cisco CTO Padmasree Warrior and Mitchell.

Warrior (and what a great name, right?) sounded like someone who just gets it, from business skills, to career management, to people management, to Twitter, for that matter!

Mitchell brought something a little new to the table...not just being more webby than the average ABI Woman of Vision, but being a proponent of open source and the open Internet. A lot of the folks there were from academia, where such openness is really foreign to them.

Met other fascinating women there too, including re-meeting Sydnie Kohara from the local CBS affiliate and Drue Kataoka from ValleyZen (intriguing concept) who also wrote about the evening and posted many shots here. 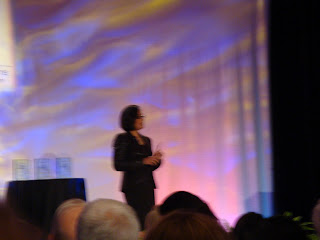 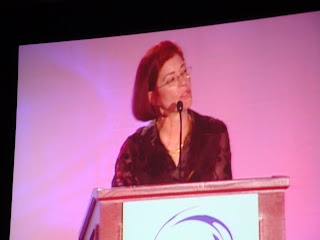 Congrats to the inaugural winner of NCWIT's Symons Innovator Awards

Tomorrow I'm headed to a function honoring the winner of the inaugural Symons Innovator Award, presented by the National Center for Women and Information Technology (NCWiT).

NCWIT created the Symons Innovator Award, named in memory of Jeanette Symons, to highlight women’s accomplishments in innovation by recognizing one outstanding woman IT entrepreneur each year. This year’s award recipient is Anousheh Ansari: the first woman private explorer in space, the title sponsor of the Ansari X Prize, and founder of Prodea Systems and Telecom Technologies, Inc.

You can read more about NCWIT, the Award, Ms. Ansari and Jeanette Symons, for whom the award is named, in the NCWIT press release.

Last week I went to the Women of Vision Awards Banquet, put on by the Anita Borg Institute. I still need to write that up and post some pictures.

But let's just say that there's nothing like reading about these award winners and what they've accomplished to both inspire you...nad light a fire under your butt to accomplish more with your life!

OK, so I haven't quite turned my Smart People Talking about Important Things™ idea into a series yet, but here's video #2.

I attended a lovely book launch party for Tara Hunt and her newly-published tome, The Whuffie Factor, yesterday evening.

Before cutting to the very creatively decorated cake (picture at the end for my foodie friends) Tara spoke a bit about whuffie and answered a couple of questions from the friends gathered there.

She very kindly cited BlogHer as an example of one of her key steps to building whuffie (Step #3, Embrace the Chaos!) and I also learned yesterday that she quotes me in the book! I'm quite proud and flattered.

It was great to see Eugene Kim and Adina Levin, both of whom I haven't seen in ages. And great to meet Nilofer Merchant, the hostess, and a prominent leader in the Valley.

And it was great to hear Tara talk about whuffie for about 10 minutes:

Oh, and as promised, the awesome cake: 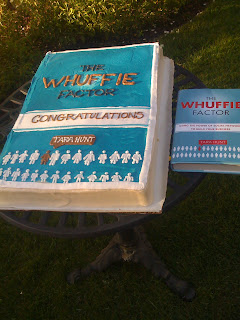 All day long I have been meaning to come over here and post a link to a post I'm very proud of. Every now and then Lisa, Jory and I collaborate to put a stake in the ground via a post on BlogHer.

With all of the many conversations buzzing about bloggers, the FTC, advertising, editorial, the decline of traditional media and more, we decided to make our position crystal clear. We wanted to revisit how we set up the standards and guidelines by which we run BlogHer and the BlogHer Publishing Network. We wanted to remember why we chose to do things that way. And in doing so, I feel like we reinforced our commitment to those policies.

The post is: The elephant in the room: How BlogHer is cracking the code on editorial content and paid advertising.

And I hope you'll read it...and the ensuing comments.

It is my belief that images of porn don't belong in a technical talk at a conference.
It is my belief that video of ever-more-scantily-clad women servicing adolescent-minded grown men doesn't belong in a business model talk at a business conference.
And yet the former happens.
And the latter happens.
In this decade, not the 70s.
And what's worse than those things happening, is that the reaction to those who dare to say "Hey, that is not OK" hasn't changed much over the years. It is still some variant of "Don't be a humorless, uptight, feminist."
Well, this proud, humorless, uptight feminist wants you to know this: If you can't make your point, your case, your argument, without tossing in a little objectification of women...your point, your case, your argument is probably weak.
And if you can't hold an audience's attention without tossing in some sexisim with a side of offensiveness, then you are probably not that great a speaker. You'd be better off working on your own skillz to make up for that. Just a thought: Self-improvement over the denigration of "others".
Just a thought. Just my advice. Take it or leave it. But can you disagree with it?