Podcast Interview with Inside Innovators from Guidewire Group

Did a podcast with the lovely and talented Cathy Brooks of Guidewire Group late last week. All about BlogHer.

Here's the link to their page, and directly to the audio file.

Let me tell you what really struck me about this interview though. We were sitting in a Starbucks on a busy Friday morning, fairly near the serving area. Yes, we did stop when they were grinding coffee beans or running blenders. But basically we carried on despite milk being steamed, orders being called out and people talking around us.

I kept asking Cathy: is this really going to come out OK?

She said "trust me." And so I should have, because it sounds amazingly clean and clear. Thanks to the uni-directonal microphone.

What will they think of next?

PS-Somehow I ended up referring to "vaginas" during the podcast, which I surely think is a first for me in a professional setting! I like what the content is of the sentence in question, but I'm still wondering...should I stick to the wording I used...which is punchy, attention-getting, truthful, a real quotable sound bite, frankly, but perhaps a tad shocking (sure, we can argue the politics of why naming a body part is shocking later) or should I find a different way to say the same thing?

See, see how I'm enticing you to actually listen to the podcast?

SPECIAL LIMITED OFFER: Opening Weekend of Annie Get Your Gun for half-price!

Well, the heat wave here in the Bay Area is having an effect on businesses far and wide, including so it seems, live theatre. One of my clients, Foothill Music Theatre, has their big annual musical theatre extravaganza opening this weekend, but apparently everyone is feeling too sluggish to pick up the phone and order tickets! So, there's a special offer for this Friday and Saturday only, and if you're a musical theatre fan in the Bay Area you should really think about taking advantage of it. (Note the reference to the air conditioned theatre please!!)

Here are the deets:

Red Hot Last Minute Offer! BUY ONE, GET ONE FREE!

Due to a glitch in our giddyup, we find ourselves with a whole mess of extra tickets for this Friday and Saturday night's performances. And we want to have a nice raucous crowd for the cast and for the critics! So grab yer pardner and take advantage of a great offer!

Foothill Music Theatre can offer you a fantastic deal on tickets to Irving Berlin's smash hit musical, ANNIE GET YOUR GUN
With full orchestra and cast of 40!

"There's No Business Like Show Business!" So, bring the whole family - corral some friends - and remember it's nice and cool in our air conditioned theatre!

SPECIAL OFFER: purchase two or more tickets and all tickets in your order are HALF PRICE!

(Discount only good for performances July 28 and 29. All sales are final, no exchanges or refunds. We're sorry, this offer is not valid with other discounts and does not apply to previously purchased tickets. But if you have already bought tickets, why not order some more? You must have some friends and family who would love to see this exuberant musical! Or pass this offer on to someone you love!)

Please do not try to use this offer in ANY OTHER WAY, e.g. IN PERSON THE HOUR BEFORE CURTAIN! ALL ORDERS MUST BE PAID BY CREDIT CARD. NO COD!

Yes, we're trying to get this offer online too, and I'll update this if we get it done, but in the meantime I'd act quickly and order via phone! (Shudder...real people interaction!! I truly have become an Internet Geek.)

AWOL for a good cause: BlogHer '06 is a week away

So you may or may not have noticed by prolonged absence from regular blogging. Many of you may have guessed it's because preparation for BlogHer Conference '06 is currently all-consuming.

It's a week away, and things are coming along nicely, but it's all the little things that I'm stressing over and worried about missing.

Here's a good example. Of course we have the obligatory totebag filled with sponsor goodies. Last year we had 300 attendees, a totebag stuffing party at my house and spent literally hours messing around with them. This year, with more than double the attendance, we looked around and found a wonderful option. A company in Concord, CA that hires people with disabilities and offers services such as bag-stuffing. Very reasonably priced. So, awesome, we decide to go for it.

Much communication back and forth with all of the sponsors providing stuffers, instructing them quite diligently to ship directly to this bag-stuffing company.

Until yesterday we realized that we had never told the company providing the bag itself this whole brilliant plan!!! They had boxes of bags in their storage room and thought we were going to come over and stuff them on their site. (Nice of SixApart to be willing to accommodate that I must say.)

Anyway, all's well that ends well; we caught it in time. Big sigh of relief. But how many other little details are out there waiting to trip us up?

In the meantime we've been getting some nice pre-BlogHer buzz, courtesy of:

and the BlogME Mixer meme.

Check it all out!

Today only: hip & zen offers 10% off everything in store, including sale items

Today only (July 11th) get 10% off everything in the store, including sale items, by entering the code 'tempt' at checkout. That beats the usual 5% discount for blog readers.

I have gotten lots of cool stuff at hip & zen and really love both the style of the items, and the fact that most of it is organic, recylcled, hand made, fair trade and many other good things. In fact, it reminds me of my days working for Macy's while in college. Every week when I picked up my paycheck, I put a good chunk of it right back onto my Macy's card.

Anyway, I get lots of comments on my hip & zen stuff whenever I wear it, so 10% Tuesday might be a good opportunity for some of you out there to try for yourselves!

A brief musing on how vegetarians can attend summer barbeques without feeling deprived. Read all about it in this month's Silicon Veggie.

Article about blogging (and a little on BlogHer)

A couple of months ago Jory spoke at an event for the Bay Area BusinessWoman Expo about media. She was on a panel along with some TV, radio and print folks representing new media. For most of the small business owners in the audience Jory's talk was the most intriguing. New media seems the most accessible...vs.trying to get a TV segment done on your business, for example...but it also was a bit of a foreign concept to most of the people there.

So the online arm of the group wrote an article about blogging, both as a general introduction and to emphasize how rapidly women are adopting this "new" technology.

Check out Women's Voices Boom in the Blogosphere, by Rose Aguilar.

BlogHer Britt Bravo is quoted, as am I. I'm glad she used my quote about women becoming fascinated by the technologies they're using:

"We have found that women who start blogging become fascinated by the technology,” says Elisa Camahort, co-founder of BlogHer. “These are women who’ve become extremely techno savvy in the online world and that’s going to have an impact on companies. Women have been a big part of driving this technological development."

It was also nice to get a plug in for the conference. Hopefully the article strikes a nice balance, making blogging seem simple to adopt, but powerful.

Laugh of the day

Marc Canter is the kind of guy who's either going full-throttle...or he is fast asleep. A shot of him sleeping during Bloggercon last weekend has been making the blog rounds, and I won't bore you by posting that same ol' same ol' shot.

No, no, there's something better than that. Apparently at Gnomedex this week Marc schooled Senator John Edwards on the definition of "red diaper baby."

No, I present you something far more amusing and simultaneously scary...which Marc himself has provided to the blogosphere in all his generosity of spirit. Introducing Marc Canter, red-diaper baby. Be afraid, be very afraid: 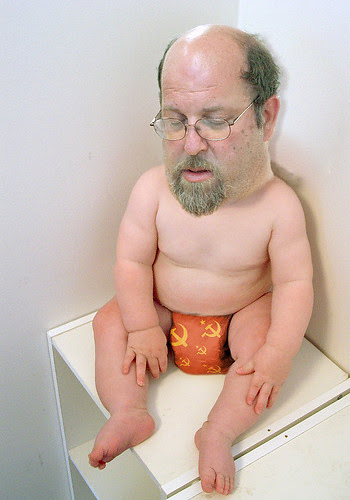